The Economic Partnership Agreements (EPAs) of the European Union 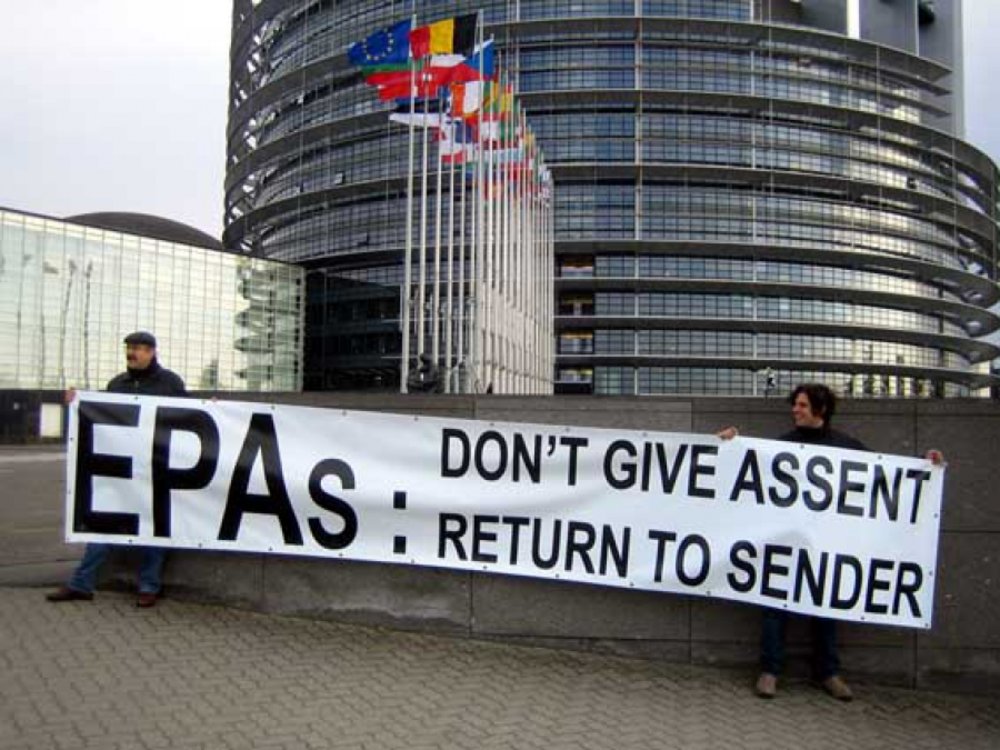 The Free-Trade Agreements with the countries of Southern Africa, Western Africa and Cameroon will soon be finalised. It is a setback for the development cooperation of the EU.

The European Commission wants to reconfigure its trade relations with the countries of Africa, the Caribbean and the Pacific (ACP-Countries, most of them were former colonies). In order to do so, it already started 10 years ago to negotiate new terms of trades with them. Their old principle that focussed on supporting economic development should end. Before, the EU allowed the ACP countries to access its markets, without demanding the same for their own products, now the EU wants to establish the principle of reciprocity of trade preferences. It means that both trading partners should have the same rights and obligations, new trade-agreements of that kind are called Economic Partnership Agreements (EPAs). They allow the European Union to an easy access to resources from the ACP-countries and also provide access to their emerging markets - the conclusion of the EPAs was a priority for the offensive trade interests of the EU.

However, the partner-countries resisted. They did not want to end the protection of their infant industries and so jeopardize their recently achieved successes. They also did not want to allow the highly subsidised agricultural products of the EU to enter their food markets. Most of the population in the ACP countries are peasant farmers, since their products cannot compete with European products, many would have to face existential problems. Furthermore, the EU wants to negotiate on more issues after the conclusions of the EPAs, amongst the issues are: the liberalisation of public services, public procurement and capital flows.

The EU increased the pressure, now the negotiations are soon to be concluded

The ACP countries did not want to risk their economic development and the means of subsistence of its people; therefore they prolonged the conclusion of the EPAs for many years. However, now the EU increased the pressure. The European Parliament and the European Council decided in September 2013 that countries which do not show substantial progress in the EPA negotiations should not any longer enjoy privileged access to the European market. Since, the EU is for many African countries, the main trading partner, they had to give in and conclude the agreements. This is appalling for all those who fought for more justice within world trade system. The EPAs will not end poverty, they will endanger local economies and they will weaken partner countries. They will lose their income from trade duties and they will lose their regulatory power to provide a sound environment for their chosen development path. The efforts that the EU does in its development cooperation are contradicted by its trade policy.

An overview of the EPA- Negotiations

The EU Commission partitioned the ACP-countries into 7 different regions, with which it negotiates separate agreements - a move that helped the EU to gain bargaining power vis-a-vis its partners.

• On the 16th of July ´14 the EU achieved a final agreement with the countries of West Africa (ECOWAS). Now it has to be ratified by the European Parliament. However, the only countries in West Africa that joined their EPA are Cote d´Ivoire and Ghana.
• The negotiations with the countries of Southern Africa (SADAC) are also concluded and the EPA needs the consent of the European Parliament.
• The EU claims it has concluded an EPA with the countries of Central Africa (ECCAS). The EU already approved of this EPA in June 2013 and now, since the Cameroonian Parliament approved the agreement on 15 July 2014, the agreement can enter into force. The agreement is termed an EPA with the "Central African countries", however the only Central African country that actually joined the agreement is Cameroon.
• The negotiations with the East African countries (EAC) are still going on. The negotiators from the East African side are reluctant to sign a deal that would endanger their infant industries. On the other side, the EU is reluctant to conclude a deal with Kenya that does not acknowledge the ICC and Uganda that criminalises homosexuality.
• The EPA with the Pacific countries was concluded in 2011 and is applied since then. However, there was only one country that joined the agreement, namely Papua New Guinea. Now the Republic of Fiji wants to apply the EPA as well. However, we as Greens oppose the accession of Fiji, as it is a military dictatorship and we do not want to support it with a trade agreement.
• The EPA with the South and Eastern Countries of Africa (ESA) is in force since 2012. Mauritius, Seychelles, Zimbabwe and Madagascar are members.
• The agreement with the Caribbean countries (Califorum) is applied since 2009. But not all Member States of the EU have ratified it yet.

What will from now on?

What is the Position of the Greens?

We Greens are against these Economic Partnership Agreements. They were only concluded because the European Commission exercised a lot of force onto the partner countries. The countries of the Global South lose the possibility to protect their markets and they are forced to open them for up to 75% of all products. Most of the time, local infant industries cannot compete with European products and therefore might vanish. This is against the principle of policy coherence for development which is spelled out in the Lisbon treaty. The agreements do not include chapters on human rights protection or sustainable development, even though such chapters exist in other treaties. We do not want to liberalise global trade, if it is against the interests of the developing countries, we want a genuine partnership with the objective of ending poverty and enabling decent lives. Our Partners need to have access to the European market, they need to be enabled to regulate their economic pathway and they need to be able to collect taxes and duties. For all this reasons, we will try to make sure that these agreements will be rejected in the European Parliament