Silence is not enough: Green proposals for a European migration and asylum strategy 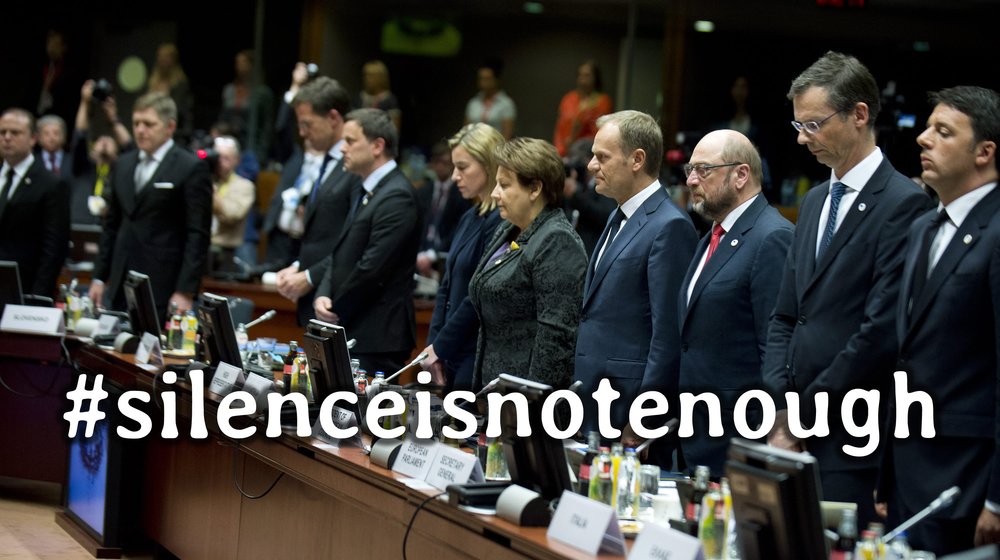 To avoid further catastrophes and deaths in the Mediterranean we need a radical shift in the priorities of EU asylum policies.  Increasing the budget of the "Triton" operation of the EU border surveillance agency FRONTEX and doing another minute of silence is not enough!

The EU needs to effectively address the root causes of the crisis in the Mediterranean, not just its symptoms.

3.safeguard the right to spontaneous applications for asylum at the EU external borders and address the root causes of irregular migration which lie in the lack of prospects due to armed conflicts and poverty and

4.replace the Dublin system with a fair system of  solidarity and responsibility-sharing for asylum seekers in the EU.

Like the Italian Mare Nostrum, it should operate in the high seas and not just off of the Italian coast. It would be devoted to proactively save lives by searching for and rescuing migrants in distress, whereas Frontex can only react to rescue calls. All Member States should contribute, both financially and with equipment and assets. The EU should co-fund the operation.

Refugees and migrants should be able to reach shelter in Europe without having to resort to criminal smugglers and dangerous irregular border and sea crossings. Estimates suggest that 90% of asylum seekers enter the EU irregularly.

•The EU and its Member States must drastically increase the number of resettlement places for refugees. The European Commission must set up a common European resettlement programme with binding obligations for Member States to take refugees according to a fair distribution key which would take into account the size of the population, economic indicators as well as the number of refugees already taken. While the UNHCR is calling for 370 000 Syrian refugees to be resettled, EU Member States have so far only provided 37 000 places. 13 Member States (Bulgaria, Croatia, Cyprus, Czech Republic, Estonia, Greece, Italy, Latvia, Lithuania, Malta, Romania, Slovakia and Slovenia) have not provided a single place. Member States must make full use of the already existing possibilities to issue humanitarian visas. They should refrain from blocking strong and common European rules on humanitarian visas in the current negotiations on the EU Visa Code.

•The EU and its Member States must allow visa-free travel for Syrian refugees to Europe.

•In addition, the Greens fully support the call of the UNHCR to make full use of further possibilities to ensure safe and legal access to the EU such as extended family reunification, private sponsorship programmes as well as study and labour migration schemes.

3. Spontaneous applications for asylum at the EU external borders

The EU must safeguard the right of people in need of protection to apply for asylum at the EU external borders spontaneously. Proposals by EU Member States to set up European asylum centres in third countries are highly problematic. As long as Member States are not willing to accept and resettle refugees there is a real danger that such centres serve to prevent refugees from reaching Europe. Likewise, the proposal by Italy to involve North African countries in European search and rescue operations with the aim of intercepting refugees and bringing them back to the African shores serves to keep refugees away from Europe and undermines the right to asylum.

We also strongly oppose the idea put forward by the European Council to link civilian and military operations under the Common Security and Defence Policy (CSDP) to migration policies as this raises legal questions and practical concerns and would militarize the EU’s approach to migration. We reject the idea to launch a CSDP operation aimed at using military force against vessels used by smugglers.

4. Replacing the Dublin system by a fair system of solidarity and responsibility-sharing

All Member States must take responsibility for asylum seekers. They must support instead of block a European programme relocating refugees from Member States which are at the limits of their reception capacities such as Italy, Greece or Malta, to other Member States less exposed to arrivals of refugees and migrants.

We call on the Commission to make a proposal for a system of solidarity and responsibility-sharing which needs to be fair to both Member States and asylum seekers. Asylum seekers should be able to apply for asylum in a Member State where they already have family ties, community links or better employment prospects, which would in turn significantly improve their integration perspectives. This would also significantly reduce irregular secondary movements within the EU as well as the need for coercive measures such as detention of asylum seekers for the purpose of transferring them back to the Member State responsible. A distribution key could be used to develop a fair allocation of funding among Member States and to allocate asylum seekers who have no strong reasons for preferring a particular Member State. In addition, the Commission must bring forward proposals to allow for the mutual recognition of positive asylum decisions and the transfer of international protection status within the EU.